Beautifully suited for all your web-based needs

Pipes must be made of metal if they convey pressurized chlorinated. But this practice is uncommon. In most current facilities that rely on a hydro-injector, only the section between the chlorine tank or container and the membrane on the pressure regulator is actually pressurized. Everything else is in a vacuum, so suitable plastic pipes are more than adequate to the job. This reduces risk in the advent of a breakage—it’s air entering the pipe and not the chlorine escape. The metallic component containing pressurized chlorine is usually provided by the supplier and is constructed with special alloys. If you do have chlorine under pressure but do not need to extract dozens of kg of chlorine per day, changing your equipment might be the solution.
The pipes in Flint were old but fine till the decided they needed to switch getting water from Detroit and get it from the Flint River. The Flint River has a high concentration of chloride which made the pipes corrode and leach the harmful chemicals. The problem is that because detected coliform bacteria the had no choice to dump in more chlorine. Pipes were already old and working well. Because they changed their water source that’s what screwed them up. They weren’t prepared enough.
If leaks are found in pipe, then with the help of ejector to evacuate all chlorine from the piping system immediately and then address the leaking joint. After the piping system has been checked and no leaks have been found, then the chlorine container valves can be opened and the chlorine gas feed system can be put into operation.
When making the final decision on which piping material to choose for chemical dosing applications, it is important to consider a material that provides low maintenance and, more importantly, chemical resistance to all grades of acid that could be used over the life of a facility. Halar piping systems can provide safety, reliability and cost savings to municipal water treatment facilities using higher strength acids. The material’s resistance to both sulfuric acid and the common contaminant of SO3 makes it an ideal choice for a piping material.
The process of Chlorine and sulphuric acid is highly corrosive.
Most of the industries using HDPE/PP/FRP bare piping for this application which is not advisable.
Always consider the safety factor and chemical compatibility, we suggest to use PTFE lined piping if the temperature is less then select lined piping ie. ERW metal pipe with HDPE/PP to avoid frequent maintenance/accident Couse of bare pipe sagging/leakage. 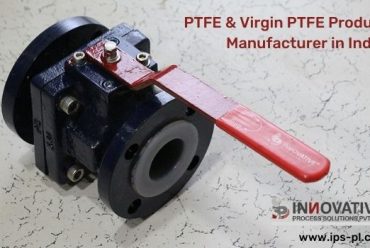 ADVANTAGES AND BENEFITS OF PTFE PIPE

Another success in PTFE International Market.